Visitors to Los Angeles curious to join locals on one of their favourite weekend getaways will find this famous resort city in the desert a two-hour drive south (actually the best known of a cluster of several cities). Palm Springs’ beginnings as a resort (based largely on its “healthful” climate and hot springs) stretch back to the early 20th century, and as the Hollywood film industry got going in the 1920s, it also became the hideaway of the stars as well as writers and artists (and to some extent remains so; one of them, TV entertainer Sony Bono, was even elected mayor). Today the local resort scene is very developed and diverse, from family properties to places that cater to nudists and especially the LGBT community (so high-profile here that the last two mayors have been uncontroversially gay). And there’s a lot more to bring visitors down here, as well, including ecotourism and soft adventure activities; cool mid-20th-century architecture that’s been the subject of documentaries and books; and an increasingly sophisticated cultural and arts scene that punches above its weight for a city of this size.

Area highlights not to miss include the Indian Canyons, ancestral homes of the local Agua Caliente tribe of the Cahuilla people who were the areas first settlers, with remnants of rock arts and dwellings, along with waterfalls, palm oases, bighorn sheep and wild ponies. The Palm Springs Aerial Tramway (above right) affords a sweeping 360-degree views from rotating cars on the steepest cablecar ascent in the USA–8,516 feet (2,596 metres) in fewer than 20 minutes. Back in town, architecture fans will definitely want to sign on to one of preservationist and historian Robert Imber’s Palm Springs Modern Tours, with highlights including Frank Sinatra’s legendary spread Twin Palms (above). Art lovers will be impressed with the collection at the 76-year-old Palm Springs Art Museum, which includes the likes of Robert Motherwell, Helen Frankenthaler, Dale Chihuly, and Henry Moore, along with Mesoamerican artifacts, glass work, and all manner of special exhibitions.

If you’re an airplane buff (and I know many of you reading this are!), definitely make time for the Palm Springs Air Museum, which specialises in World War II planes and includes model warships, artifacts, memorabilia, flight demos, and even biplane rides on Saturdays. Then there’s one of the newest area attractions (since 2012), a lavish estate called Sunnylands which once belonged to media mogul, power broker, and at one point ambassador to the UK Walter Annenberg and is still used for high-powered political and diplomatic meetings and retreats. There’s a free museum, and house/grounds tours available via advance booking. 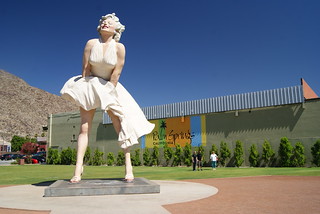 Accommodation runs the gamut from motels, hostels and bed-and-breakfasts to the most lavish resorts imaginable. My historic favourites include the Colony Palms Hotel, a classic since the 1930s, the Andalusian Court since the 20s, and the intimate Willows Historic Palm Springs Inn, a mansion also built in the 20s, as a hideaway for the rich and famous. Then there’s the nudist Terra Cotta Inn, whose bit of history includes President Kennedy getaways with Marilyn Monroe (whose huge statue, left, you will certainly also not want to miss) when it was the Monkey Tree back in the early 1960s. And of course as I mentioned the LGBT sector is huge here, and exhibit A is a panoply of more than two dozen properties catering to gay men and lesbians.

Finally, the hundreds of dining options in Palm Springs and surrounding desert resort cities like Rancho Mirage, Cathedral City, Desert Hot Springs, Indian Wells, and Palm Desert offer the proverbial something for everyone, from the usual fast food to exquisite haute cuisine on a par with any top kitchen in the world. And if you can make it here in early June, there’s a restaurant week on during which more than 100 top-notch eateries serve prix-fixe menus at bargain prices.

Just another way the desert can prove surprisingly delicious.